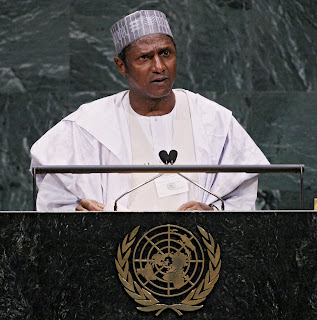 I’ll start out making it clear I share a very strong bond with Late Umar Yar’adua, so strong is it that it outweighs every other things
put together that you may want to consider. May Allah accept his soul into Paradise and forgive his sins and shortcomings. Amin.

My mobile phone had woken me up at about 12:27 am, I’m a staunch fan of crazy ringtones, I scrambled over the rug before I could finally spot my device. A text message from a very close friend had conveyed in simple english the demise of Yar’adua. I sighed and had a moment of silence to pray for him; the controversy finally came to rest. I’m not a fan of Yar’adua, but in death, I owe him very sacred responsibilities, one of such, Respect. I’m therefore not writing to further damage a bad situation but besides picking a lesson from death especially in high places, it is pertinent to re-examine what factors we put into consideration before making decisions. Also, who are the people we so trust to guide our decisions and what exactly motivates their approval and or otherwise.

At the end of it all, we all might come to agree I hope, that even Healthy Heads of State die around the world either as a result of
assassination or accidents, so the main issue might not be Death as it were but how some decisions we make having thoroughly considered our state of health reduce our eventual demise to Suicide!

Let me quickly advice you ignore most statements credited to most politician over this issue, it would be a rehearsed collection of
words meant to put them in a sober frame. Don’t buy it, deep within, they feel it has finally come to an end and everyone would begin to count his gains or losses. To say the 2007 elections were far from the true representation of the Nigerian peoples’ choice of leadership is just reproducing an over-bothered picture of outright disrespect for the right to choice. How men of acclaimed high moral values then get to benefit from such anomaly beats my imagination so much so that I feel everybody and I repeat everybody that today currently occupies a seat wherever in whatever capacity, dead or alive, had fed fat on a grossly manipulated electioneering process and as such should willingly shed some weight of morality and waste the rest trying to rewrite their own very history.

What makes Late Yar’adua’s case special is that he had a choice from day one, for the sake of a broad window of decision making, I’m
counting my day one from when the idea was first sold to him, he must have had an opportunity to choose between his Health and the Hot Seat.

Let’s give it to him that he made a wrong choice ab initio, his health situation gave a clear warning when he collapsed during a campaign outing, yet, his rumoured death then, rather than taken as a mortal warning was danced around for its political gains. Today, those days and periods would sound like yesterday!

If he had families, I would ask what their concerns were or whether such concerns irrespective of its colouration mattered to the First
Family. I have always been an advocate of standing by ones integrity whenever it clashed with interest. Believe me, it pays off. I would as a result of this score Yar’adua very low and also let whoever is advisers were share a part of the blame because at some point going by Medical postulations, it was obvious our Man couldn’t make his own decisions anymore. So passionate am I about this fact that I found it very hard to agree that late Yar’adua knew he was being flown to Nigeria or that he was even in Nigeria.

Just like I’ve earlier indicated the direction of my article, it is also not meant to grace the already overblown influence of Turai but to ponder over what choices she could have helped her husband make, what interest she puts first, that of the nation that needs a truly
committed, hardworking and Healthy President or that of making clones of First Ladies of her daughters or the transient title of First Lady and its worldly attachments. Whatever she was thinking or informing those thoughts has now set with the sun. I need not add that Nigeria would move on.

The common ‘I WOULD DIE FOR NIGERIA, IF THAT’S WHAT IT TAKES ANTHEM’ has finally come to bear its true meaning.
Ours is a country that really doesn’t need anybody to die for her,a million and one had already done that and moved us away from that
phase. What we need is a Leadership that would restore hope. Very many of these guys around the corridors of power, plan and make
authoritative statements about the future as if they had an arrangement with death. Yar’adua most likely must have discussed what
his Second term in office would be like.

We need to give more time to reading between the lines, that’s where the facts are. The lessons of Death and the choice of Man have a way of explaining Destiny: what every man is designed to work with. All matters hanging around this gentleman can now be allowed to rest with him and pay attention to the Lessons thereof. All the lobbying and lobbyists, sycophants and their over-priced masters, whatever categories that are left would today learn to respect the ultimate power of Death.

If Turai had truly managed to keep things the way they went for the sake of remaining the first lady, I think events have finally set the
stage for an official first lady. A new page has inevitably been open and whatever falls on the old page sadly would serve a mere purpose of historical reference. Whatever achievements we might want to add late Yar’adua’s credit, we may want to include the fact that he is the first Nigerian President to die of natural cause while serving. ‘Natural cause’ in this context could only mean that there wasn’t a Military Coup! What a record?

The National Assembly and House of Representatives that could not come out boldly to declare that gentleman unfit and help him enjoy his last days have been shamed. The religous leaders who have refused to admonish the grandstanding former First lady and the hailing President on the stance of religion on Power and leadership have failed in their responsibilities as custodians of Faith.

We mourn as a nation, the death of our President just as we should united by the lessons of his death.

Let’s live our lives such that when death finally comes knocking, we’ll be honourable.