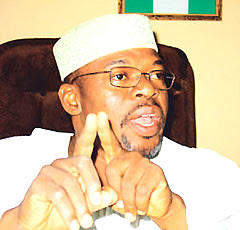 I weep for this nation.

Just before I put anything forth, I’d like to copy a part of my earlier article for the benefit of those who did not read it.

“….. I therefore can not be deceived by the saintly disposition of his anointed disciple in the Ekiti mandate scam, Mrs. Ayoka Adebayo, the Resident Electoral Officer in Ekiti. She must have been brought into these scheme for two clear reasons; either she is so weak and can be easily manipulated or very loyal and criminal-minded as Iwu!…”

I am in a way delighted that I did not fall for the deceptive style of this 74yr old widow who ought to have by now retired from civil service. I just sensed something fishy when she arrogated her refusal to announce results to FEAR OF GOD. That just came as a repackaged ‘IBB-brand’ of promise to Nigerians in 1992/93.

I do not have any grouse against those who fell for her move, it is just natural to trust such utterances given the acclaimed Christian background she held on to; but how do I explain the standpoint of CAN to have hastily tagged Mrs. Adebayo a true Christian. With what standards do you measure the truthfulness of man? I’d like my Christian brethren to furnish me with a response. The moment you begin to drag the sanctity of God’s name to political arena especially in the Nigerian context, you no doubt insult the pride and dedication of the true worshipers.

Here is the game plan:

Maurice Iwu chose one of his MVRs (Most Valuable Riggers) to anchor the Ekiti election not only riding on her commitment to fraud but also her abilities to pose as a SAINT. 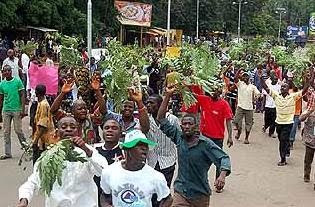 Mrs. Adebayo REC, according to the script, feigned a strong disapproval of the conducts of the elections and helped fuel an already tensed atmosphere in order to create a justification for militarization. She cried for her life to gather sympathy and resigned to finally confirm her principles. Less than 48 hrs, she started speaking from the two sides of her mouth claiming to remain a member of the INEC Mafia or Family as she put it. The ploy played out so well that the Federal Government deployed so many personnel that outnumbered registered voters.

With the presence of such militarization, an unarguably subjective calmness visited Ekiti not necessarily because people were happy, but afraid. You only need read about the havoc wrecked at ODI Village during the Obasanjo regime to understand why people withdrew into there shells.

As planned, elections were hurriedly rescheduled while this graveside peace lasted to rubberstamp the well planned out scenario.

Then came the Head of the titans, the woman whose voice was needed to validate the rape of democracy, Mrs Ayoka Adebayo. A master at the art, laid the case finally to rest by misrepresenting the raging resentment of the Ekiti people for peaceful conduct of the elections and then went further to declare the most controversial results in the Ekiti rerun (Ido-Isin) all in the name of arriving at a mathematical justification to declare Segun Oni as the winner.

You can now draw the curtains and go home, we have a new GOVERNOR!
I would have being glad if these shameful men of no virtue had put me to shame by doing the right thing. Nay, they are products of malpractices and that they shall hold on to.
It is unfortunate we have to battle this cankerworm continuously but we can only hope things get better.
I need to run now while I hope I would have no reasons to write the part 3 of this article.
You can place your bet; Segun Oni would give me a reason to!
Thanks for reading as I make this final request, pray for Nigeria and please take God’s name out of this mess!